The French Open, the second tennis Grand Slam of the season, will begin on Sunday. Number 1 Djokovic will go to defend the title while Nadal would like to win this Grand Slam played on a clay court for the 14th time. Both of them will get the challenge of Zverev, Tsitsipas, Medvedev, Carlos, and Casper Rudd.

At the same time, in the women’s category, number-1 Inga Svatek will go down to become the champion for the second time. They will be challenged by defending champions Krajnikova, Sabalenka, Badosa, Pliskova, Kontavet.

French Open 2023: Draw in the Same Group for Djokovic,…

The French Open was played for the first time in 1891. Initially, it was played on sand courts, but from 1908 it was played on clay courts. In addition to clay courts, Grand Slams also take place on two different courts. Wimbledon takes place on grass courts and the Australian Open and US Open are held on hard courts.

The court is made up of 5 layers. The layer is made up of pebbles, limestone, coal, and bricks. 2 mm of brick powder at the top. layer of. At least 1.1 tonnes of material is used to make a court. About 100 people maintain the court during the tournament. Due to the clay surface, it is considered to be the slowest court. This slows down the movement of the ball, so it becomes easier for the opponent to return the shot.

That’s why a fan of an all-volley game like Pete Sampras never won the French Open. This court is a favorite of baseline players. Apart from this, players who spin heavy are also successful here. Rafael Nadal has been the most successful on this court. He has won the French Open 13 times. Again this year also he is the favorite to win the FO title. 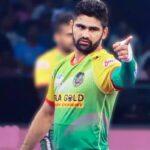